The panic attack disorder is one of the most terrifying experiences that a person can go through. It is about the body getting out of control, so that various unannounced symptoms take over, each of which is intense and unpleasant by itself. But when all the symptoms occur at the same time, the person involved has a feeling he is right before death or on the verge of getting mad... Let's have a look… 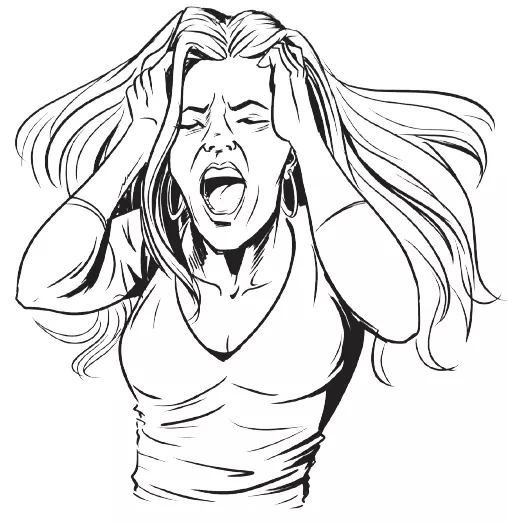 The panic attack is accompanied by a very powerful fear of death. People who have experienced panic attacks describe this as one of the worst experiences in their lives. The fear is so strong that they completely cripple in the moments of the attack and they find it hard to hide from their surroundings.

When a panic attack happens for the first time, people fear that they would die, that they have a serious illness, or they have experienced a heart attack or something similar.

They feel horror and hopelessness. Their bodies are flooded by their senses, and people are just waiting powerlessly their death to come. Panic attacks never mean a real death or any serious health hazard.

Despite the fact that the feelings are so intense and so threatening, nothing really happens, and after the attack, the body calms down. People usually visit an emergency medical center when they have such a panic attack for the first or second time.

Medical examinations usually do not show any maladministration.

Despite the medical assurances that the person is healthy, people never forget the attack. The fear of fear develops, which means that they still expect from the attack on that something bad will happen again.

So the first and most difficult symptom that accompanies the panic attack is FEAR. The strong fear that develops during the attack and is always there afterwards, is the fear that the attack will happen again.

Many people experience dizziness and nausea during the attack.

Other symptoms of a panic attack are more typical than this one, which also does not occur with all people. However, it is very unpleasant, because people feel that they will fall down. Sometimes they also feel soft legs. When they go through various medical tests, it shows again that there are no serious organic causes for vertigo and nausea.

This symptom is present practically in all people having panic attacks. A powerful fear, which we mentioned earlier, is accompanied by a rapid heartbeat.

A panic attack can happen suddenly, without a warning, in a situation that can be quite common. And when suddenly the heart begins to beat strongly, people are very surprised, confused and - especially the first-timers - not knowing what to do.

The attack may take several minutes, sometimes up to half an hour, in rare cases, even longer. And all the time, the body is agonizing, the heart is beating fast, and as a result people start sweating, they breathe rapidly, and find communication with the surrounding difficult.

4. Pins and needles around the body

Panic attacks are often accompanied by symptoms of tingling. This can appear in different parts of the body, it can be in the arms, legs, or on the head or anywhere else. Pins and needles occur suddenly and disappear when the panic attack ceases. Sometimes their bodies shake, other times they feel as if the tingling would move up and down their bodies.

5. The pressure in the head

Sometimes people feel strong pressure in their head, they feel as if their head will blow up. However, sometimes they feel a burning pain in their head, and either in the ears or behind the ears. All these feelings are strong, very very hard, but not dangerous. People do not die because of that, they do not get mad and do not get ill.

The only thing that starts within them is their everyday battle with their feelings, their daily thinking about them. Gradually, they even begin to avoid the situations that have led to these feelings.

6. The feeling of choking

Often there is also their feeling that they cannot breathe. There is a strong pressure in the chest and people feel that they will suffocate and die. All of these feelings eventually disappear and people calm down, but this experience is always in their presence and they start shaping their lives according to it.

7. Fever or chills in the body

The panic attack can also be accompanied by the following symptoms: fever that people feel around their bodies, or - the chills.

The body simply cannot normally regulate its temperature during the attack.

At first there may be chills that are replaced by the feeling of fever, or there can only occur one of the states described. When the attack ends, the chilling or feeling of fever fades away.

During a panic attack, people often experience that their environment is unusually changing in their eyes.

Sometimes the colors or the shapes of the environment change. Sometimes they see everything square, sometimes round....

All these even increases the feeling that the person will go crazy, will become crazy, so that (s)he will be no longer able to function normally.

Panic attacks are still quite unknown issue to most people, which is why they represent an even greater shock when they appear out of the blue. There is a strong fear of death, which is accompanied by an equally strong fear of going mad.

This fear stems from ignorance of the nature of panic attacks, but it can be very, very strong.

In reality, no one will go mad by the panic attacks. It is only about the fact that too much stress accumulated in the body, and the body can no longer function normally.

And a panic attack is a serious warning that this cannot go any longer ... that the body needs help to relieve the accumulated stress.

Nobody will get mad.