How to Treat Panic Disorder ?

So, how to treat panic disorder, one of the most horrible experiences a person can have ?

First, be aware that you are not in serious danger.

No one has ever died because of panic disorder.

It is instead simply the body’s cry for help; the sign that the body simply cannot continue to function normally under the given circumstances.

Somewhere in life you have gone too far.

Maybe you work too much and are completely exhausted or have over-indulged in one or more intoxicants (drugs, stimulants, energy drinks, etc.) and have pushed your body to its limit.

Perhaps you have been hit by the passing of a loved one and have not been able to process the loss at an emotional level, or simply suffered terribly in childhood.

Whatever the case, begin with the understanding that panic attacks are not life-threatening.

You are not going to die, lose your mind, or have a heart attack.

You do, however, need to take positive action to give your body the help it needs and change the direction your life is going in.

Although it is difficult to keep in mind during the event itself, it is very helpful to try and remember that what you are experiencing is nothing more than an exaggerated organic/emotional response that in the end cannot actually hurt you.

Your brain is raising a false alarm, sending out signals that you are in serious danger when, in fact, no such danger is present.

If you want to make panic attacks a thing of the past, you will have to ‘‘reprogram’’ your subconscious mind and teach it not to trigger such over-the-top reactions under what are actually utterly non-threatening circumstances.

Panic disorder do pose special problems, however, when they occur in situations that require concentration and self-control, such as when driving.

In this case, the attack is dangerous, even to the point of being life-threatening. People experience panic attacks behind the wheel most often in connection either with tunnels or stretches of highway with no exit.

There may also be fear associated with traffic jams.

All of these have one thing in common: they make the subject feel trapped. People who have gone through a claustrophobia-induced panic attack on the road may well decide to forgo driving on freeways altogether.

Such people typically require professional help if they want to permanently rid themselves of this problem.

The cause of panic attacks needs to be determined, whether it is the death of a loved one, a difficult childhood, an extended period of exhaustion, or anything else a person may be traumatized by.

Normally panic attacks do not have just one single cause, but are instead a mixture of multiple negative emotions in the body.

As one goes through the process of liberation from these feelings, one slowly and gently uncovers these traumas and disarms them.

In addition, changes in life are also generally necessary, including such things as getting more rest, maintaining life balance, and a change of environment. 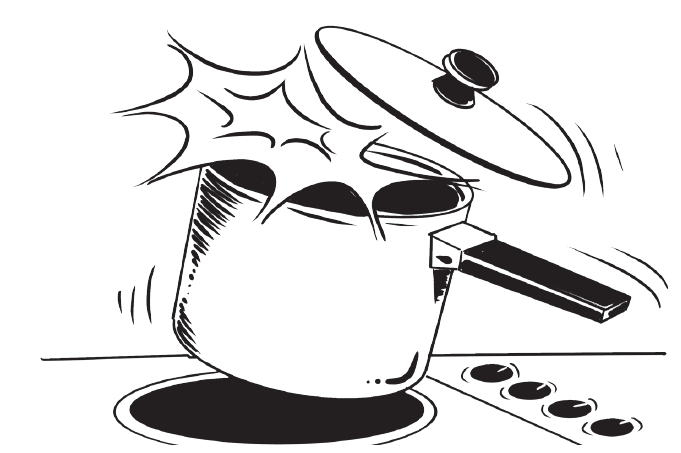 We could imagine a panic disorder as a pressure cooker that has been opened the wrong way.

When under high pressure, steam has to be let out; if opened too quickly, a pressure cooker will produce an explosion of steam that can cause burns or other injuries.

When the body is under the pressure of accumulated emotional pain, it behaves in a similar way.

As such, EFT therapy is like the pressure release valve that lets the steam — here, pain in the body — out slowly and evenly.

Panic disorder thus mean an uncontrolled release of pain from the body. The pain comes bursting out like steam in a pressure cooker.

Thus, the way to help a person who is having a panic attack is to slow down and regulate the outflow of pain. It has been shown that if the sadness, anger or fear is cried out or otherwise released from the body during EFT therapy, panic attacks will no longer occur.